The Silk Market at Yongan’li

Whether you’re a tourist, a student, or somebody working in Beijing; the giant markets here are renowned for their large quantities of both customers and counterfeit goods. Expensive watches, designer-brand clothing, cultural souvenirs, electronics, purses, jewelry, or fresh kicks; places like the Silk Market, Tianyi, Yashow or Zhongguancun’s electronics plaza will have a knock off of what you’re looking for. Or an authentic item that has a hot discount, having gone missing from a factory that just so happens to be near the shop owner’s family’s home town. Though I’m not completely sure where all of these goods come from, I do know that you can find literally almost anything at these 10+ floor indoor bazaars. Each floor is overflowing with crowds of shoppers and stores squished back to back, and the sales people at each one will yell to you, grab you, and harass you as you walk by them. It is quite the experience and a must-do for anyone in Beijing, though if you are claustrophobic or dislike crowds then these places are probably going to send you into a full-on panic attack. Then again, I can’t really imagine anybody who’s claustrophobic or afraid of crowds being able to spend more than a day in Beijing anyways. It’s easy to lose time as well as money in these markets; besides the amazing bargains you can negotiate, which are cable of silencing inhibitions quicker than beer goggles, these buildings are windowless and incredibly easy for several hours to slip by… These markets probably copied this trick straight of the casino play book. 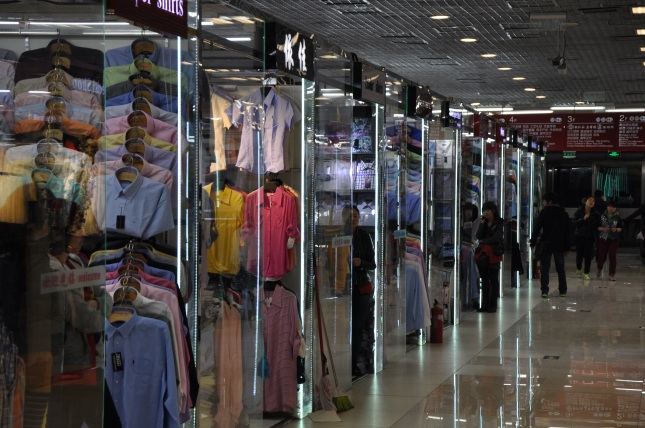 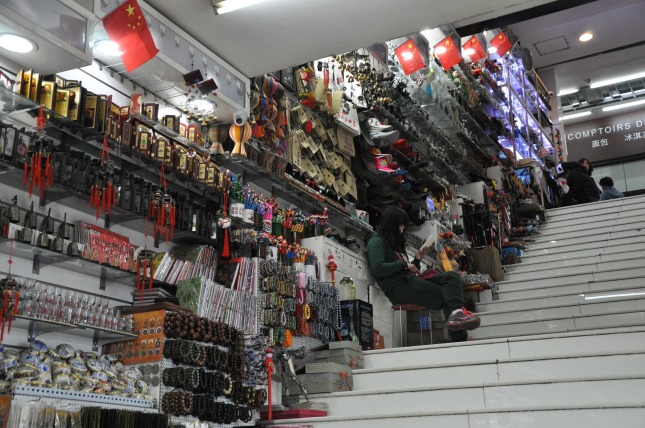 Thus with the creation of these great colosseums, the expat sport of market haggling was born. Every store will attempt to sell their wares at the western authentic price, often six to ten times the lowest price they’ll go. How low they go though is up to you. These businesses depend on cash flow, which is why you’re able to get such low prices. Depending on how sales have been that day, week, or month, they might be more worried about making rent than they are a profit, and the store owners know they need to pay to play. They’d rather lose money on those Nike’s you bought than be forced to liquidate their shop’s inventory after having been evicted, which is a good dynamic to understand once you get in there. This essentially means that minimum prices don’t exist, and if you hit the right stores and haggle hard enough you can get some very great deals. Since anybody reading this has or will be going to these markets to test their skills against battle hardened sales people, let me offer some haggling tips that have come from mine and the people I’ve met here’s experiences, as well as some words of caution we learned the hard way.

Never settle for their price: As I mentioned before they set prices incredibly high, both to dupe naive shoppers, as well as create a buffer against us hagglers. A general rule of thumb is that you can almost always cut their price by 80%. 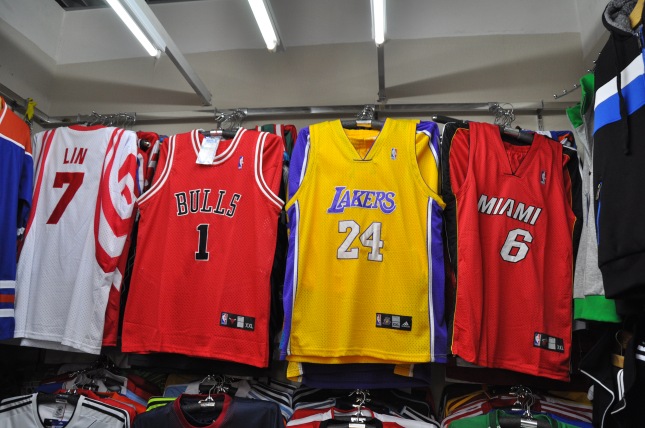 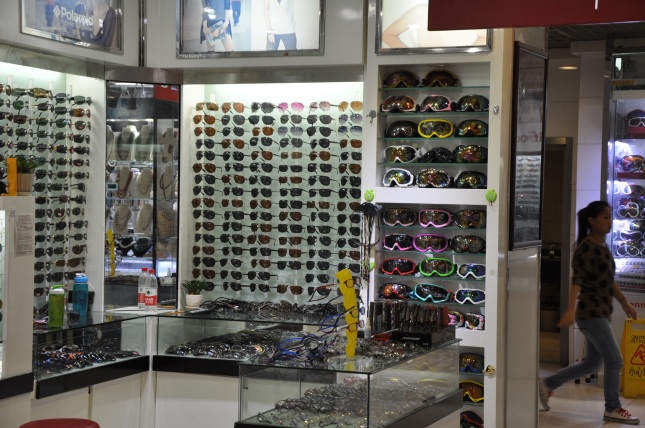 Always be ready to walk away: It may take a little while, but it is worth it. To get a GShock watch for 7USD, I had to leave 4 times, each time being chased with lower offers or grabbed before I could leave again. The whole process took about 25 minutes.

Start lower than you’d be okay with: There’s nothing worse than when you say what you think is a good price and they say OK. If they break too easily you know you haven’t gotten the best price. Remember it’s a cash flow business as well, and money coming in matters more than profit sometimes. And if you try to lower it after the fact it will be much harder, but quite possible and a great way to piss them off if you’ve been having a frustrating week. Or you can go to the shop next door, you never have to pay more than you want to here. 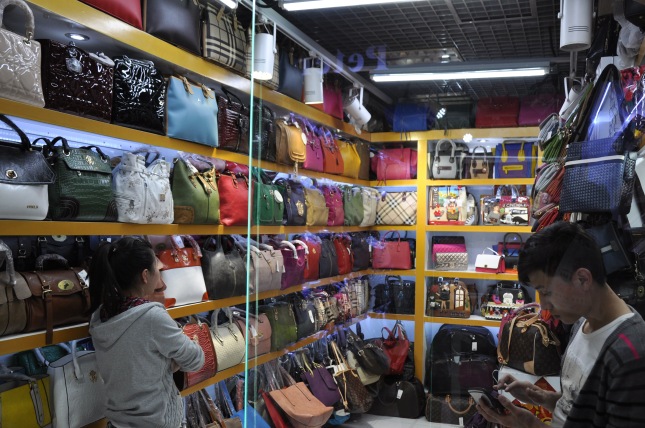 I don’t shop for purses, but under 200RMB is very possible

If they start to get mean, you know you’re getting a bargain: They don’t like being bested, though they will allow it since so many chumps have overpaid. Or to stay in business. If they start to insult you, you’re close to their minimum. They’ve called me ugly, a mean man, and even told me they want to kill me. One notable time they told my girlfriend she should dump me because I’m a bad person and cheap. I’ve even been slapped by a woman. Stay strong and pay less. 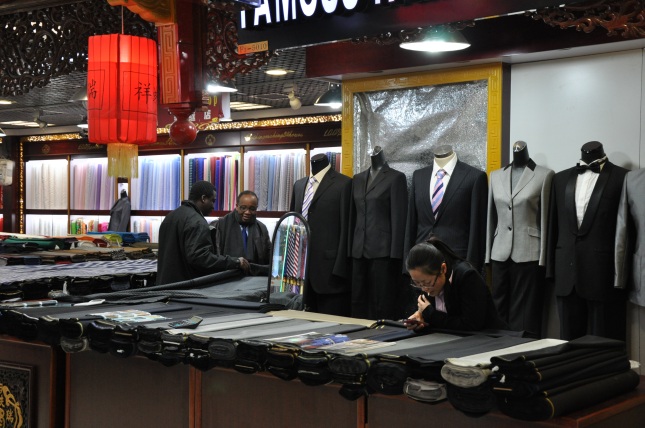 Switch between English and Chinese: Most of the sales people are quite proficient in English, some even in Russian. They will be able to understand most of what you say. One tactic I’ve found that can get a lower price is switching between Chinese and really high level English. It confuses the shit out of them, and wears them down much quicker.

Go near closing time: I’ve found I get the best prices late at night before they close. I’m guessing it’s because they are probably exhausted from combat, as well as trying to make last minute sales before closing. You also might get lucky and find a shop that didn’t do well that day or week, and out of desperation may give you a much better deal. 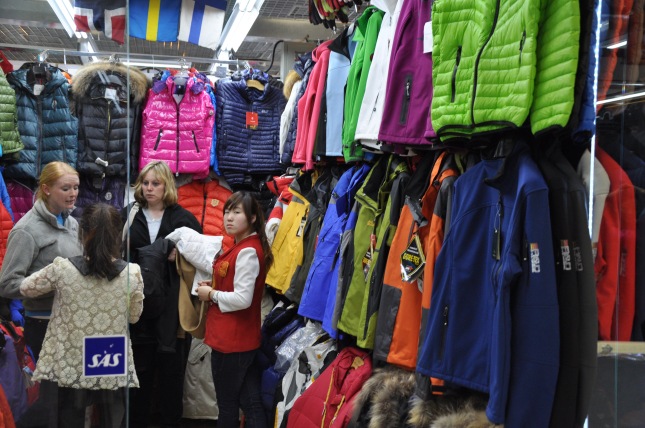 Shops that are closest to the entrances are toughest to haggle with: Most floors have a distinct theme to them such as designer clothing, or shoes and jewelry, and often each floor has multiple shops that are back to back, selling pretty much the same goods. Because of this, you can find the item you want at almost any store within 5 shops. Here’s where strategy comes in. If all the shops sell the same items, why go further than the first one from where you entered? Most people will follow this line of thinking, creating cocky and unbudging merchants by giving those closest ones the most business. Therefore, the reason you should instead press forward is because the merchants further away will get less business, and in turn be more desperate and cut more deals. 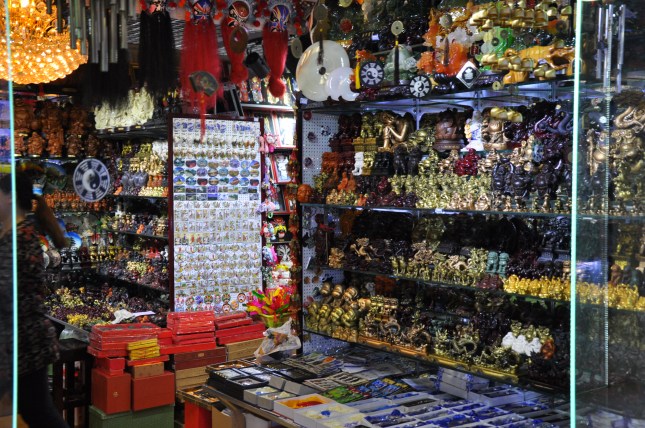 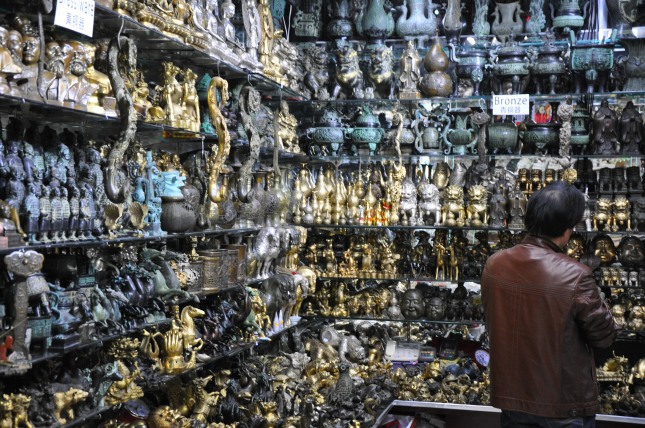 Nothing is refundable: They will say it is, and have signs assuring it, but it won’t happen most of the time. It’s incredibly safe on your part to assume you can’t. 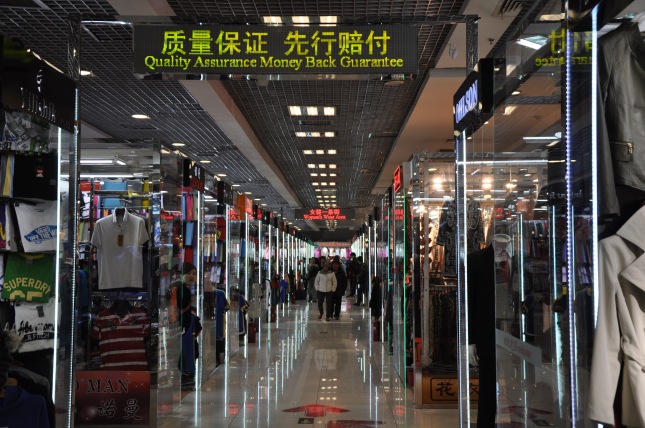 Check the quality before you buy it: Besides the fact that most of these goods could be of shoddy quality to begin with, if you haggle hard they’re likely to try to pass off a defective one on you. My girlfriend got a really good price on shoes once, and as they boxed them for her, they swapped them with the dirty scuffed up display pair. A pair of headphones I’d bought didn’t work on one side. A watch I’d picked broke within a day because the band wasn’t attached correctly. With the inability to return, and also the likelihood you will be blamed for the damage solely because the Chinese need to save face, you should be sure of an items quality before you hand them any money. Also, a tip on buying DVDs: If you find a place where they consistently work, stick with it. It sucks when the movie shits the bed half way through because the shop didn’t burn it properly. 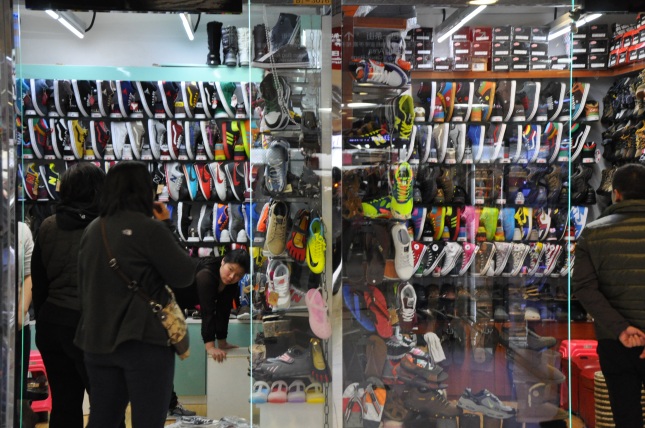 High Score: A pair of Nike Airmax’s for 140RMB 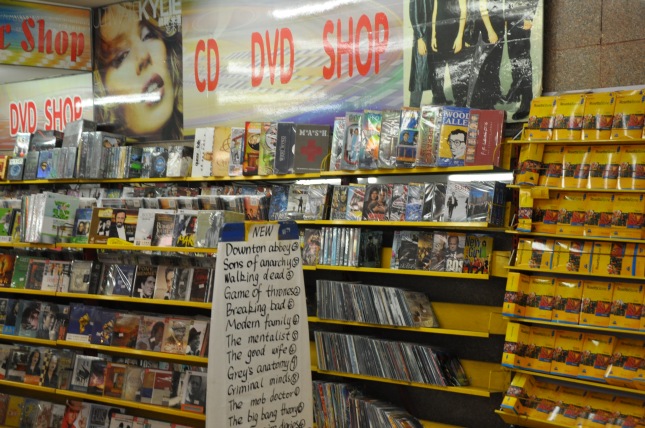 Don’t buy electronics in China: If they are counterfeit, then they will not work as well as their authentic versions, and could even have different hardware or be missing features. You cannot trust what is inside the machine, or what it can do. For the price they’ll ask of you for that “iPhone,” which could burn out in a week or be a shitty droid model they’d managed to fit in the iPhone body, you’d be better off just going on Craigslist when you get home. And if the electronics are authentic, they’re going to be taxed to high heaven. Even then price isn’t a determining factor, they’ll just sell the really good counterfeits for an authentic price and lie. It would be best to wait until you get home, or make a trip to Singapore.

It’s cute when they yell “No photos allowed!!” 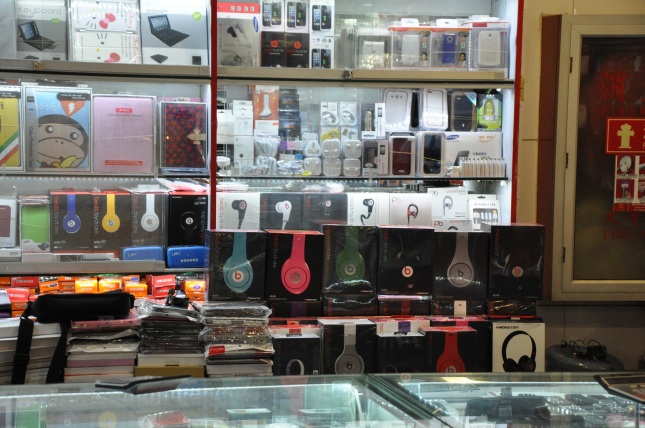 Try to pay with exact change if possible: I’m not even suggesting this for counterfeit change reasons, which by the way you should always be alert for. You’re a foreigner and therefore automatically naive, so fake bills could be passed off anywhere. I’m suggesting this to you not for counterfeit bill reasons, but because now that you’ve be trained in the art of haggling, you are going to encounter a lot more butthurt than the average shopper. I’m going to tell you a tale of battle that has happened to me, and similarly many people I know. I haggled two pairs of nice Levi’s down to 150RMB, and the jean monger were not pleased. When I paid with 200RMB, they evened the odds by only giving me one pair of the jeans, and saying if I wanted the other I’d have to pay an extra 50RMB. I argued for over ten minutes with them, even offering to just take my money, give them back the one pair and leave. They said no, and even refused to give me back the 50RMB change for just one pair of jeans. It got so heated that the person I was with eventually succumbed to their hostage tactics and paid the wenches off. Another time, a different pair of mongers just refused to give me my change, saying that I received a fair price. To protect yourself from these scoundrels and cry baby sore losers, I suggest paying with as close to exact change as possible.

2 thoughts on “A Foreigner’s Guide to Haggling”