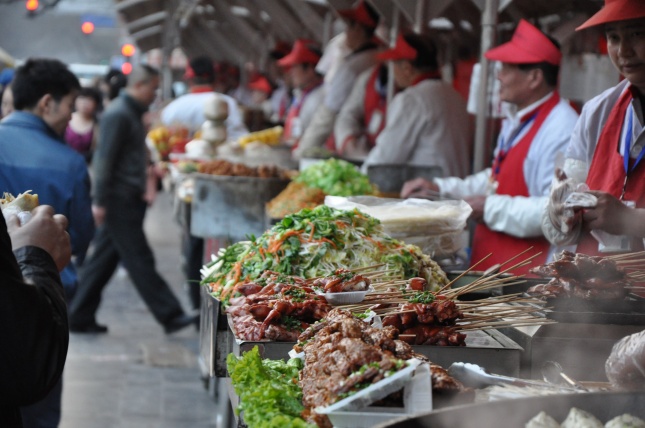 Normally if a fellow foreigner living in Beijing were to ask me “should I go to Wanfujing?” I would tell them that whatever they needed could probably be found somewhere else in Beijing with less hassle. I don’t really care for Wanfujing, and have left the area thoroughly annoyed about two thirds of the times I’ve went. Pickpockets, prostitutes and tea house scammers are notoriously common in this area, and for the most part Wanfujing is a taxi sinkhole; a place where the drivers will attempt to charge you astronomical prices in the ballpark of 200-300RMB for a 40RMB trip because they don’t think you know any better. That being said, I’m an expat familiar with China and therefore have different expectations than a normal tourist, which leads to my personal disdain. Wanfujing is home to some of the most famous hotels in Beijing, and because of this it has become the number one tourist area in Beijing. There’s English everywhere, dining is tourist-friendly and simple, most business owners are better able to help foreigners, and there are a lot of great cultural seminars nearby for an interested traveler to attend. The area is incredibly convenient for somebody staying in Beijing short term, and so long as they’re wary of scams and don’t mind paying a tad bit extra for things, it’s a good place for them to enjoy themselves during their travels. If you’re planning to visit Beijing and want an easy, enjoyable area to stay at, then Wanfujing would be my recommendation. And even for the experienced expat and the biased, sometimes arrogant blogger, Wanfujing has some cool stuff to offer; its giant foreign book stores, a large, ornate Eastern-orthodox church, and the Wanfujing Night Markets.

That dude in the black shirt is a Teahouse asshole

Wanfujing’s night markets are a must do for anybody in Beijing, and by far one of the most culture shocking and fascinating experiences you can have in Beijing. The night markets, which are open from 4pm to around 9pm, consist of two different locations; The first is an alley way bazaar called Snack Street, full of popular Chinese snacks, tourist souvenirs and strange goods that you can’t find anywhere in the city. The other location, which I plan to focus on in this blog article, is two blocks North on Donghuamen street and sells any exotic food you can imagine.

The exotic food market on Donghuamen 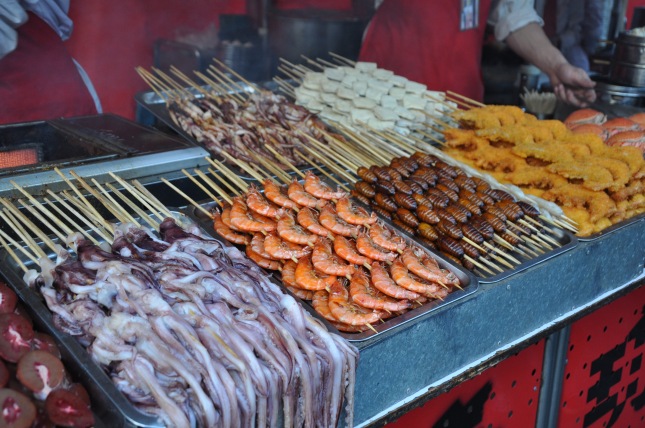 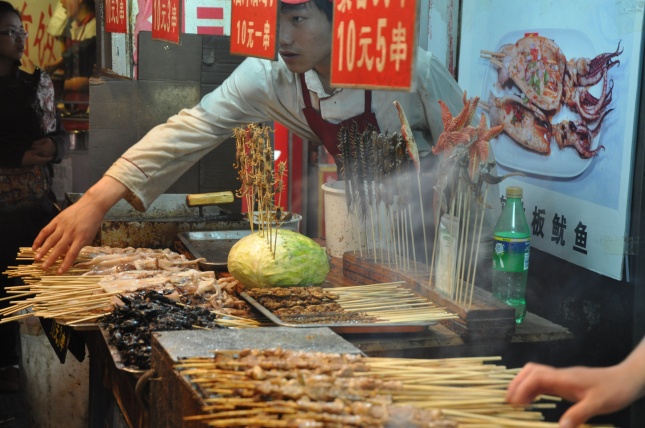 Besides the usual street foods of wraps, noodles, and chuar meats that you can get all over Beijing and other Chinese cities, the Wanfujing Night Market is where you can eat cat, dog, snake, horse and just about any insect you could imagine. Some of the food here is stomach turning, while other snacks are surprisingly delicious… Fried scorpions turned out to be amazing! It’s a very fun experience to go and look, and if you’re brave enough try something exotic. You might not walk away satisfied, but you will forever retain bragging rites during stories to come. As a zoology major, I felt it was my academic duty to try every animal possible, and I hope my reviews make you hungry! 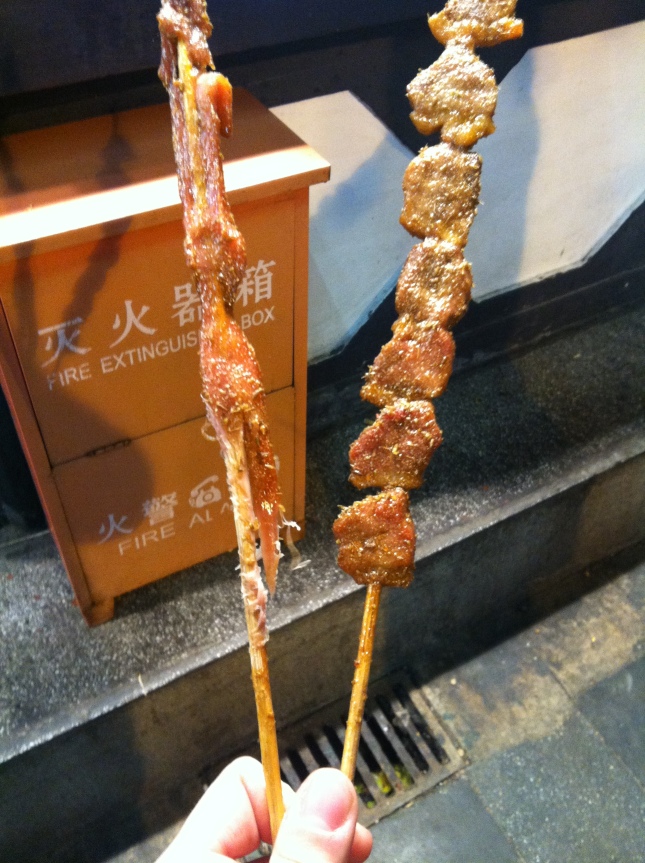 On the left is snake chuar, which was chewy, salty and a little stringy, but had a very good, almost jerkyish, flavor. The right chuar stick is dog meat, which was fatty and had a dull flavor. I wasn’t very impressed with dog, but it could’ve been a bad cut of meat. Not shown was the cat and horse chuars. The horse was tender but had a grainy texture, and tasted a lot like really tender beef with a little bit of gaminess. Horse is definitely worth eating again. Cat was incredibly tender, on par with fish, and almost tasted like lamb or goat. The cat was hands down some of the best meat I’ve ever had in my life, comparable to sashimi.

After deep frying the stick of live Scorpions, they added some spices and handed it over. I was a little hesitant but I gotta say, they were pretty good! Crunchy and tough but full of protein, and fried Chitin tastes a lot like KFC crispy chicken skin. I went and got seconds. The larger scorpions had a lot more juice inside, and it tasted way too stale and scuzzy for my comfort. The smaller ones were a lot more enjoyable, and never made my stomach turn upside down.

I only ate the fried crabs, I had no clue how to deal with the shells of the cray fish and tiger prawn. Plus, I wasn’t confidant that deep frying them would adequately cook their meat through those thick shells. The fried crab was good but a hassle. They’d never deshelled it, so you were expected to chew it and spit out the shell bits, and I honestly think it would’ve been easier to tie a cherry stem in my mouth than navigate that mess. The final result was a lot of lost meat and some cuts in my mouth, not to mention several fragments of shell going down the hatch by accident. I suggest getting the fried shrimps instead, they’re just as tasty but much more manageable.

The silk worm pupae were like little grenades of ipecac, and the second I’d managed to break through the first one’s leathery casing and actually bite into it, a briny, uncomfortably warm, foul tasting liquid spurted into my mouth… as well as onto a guy passing by. The tan liquid was a milky consistency and just hot enough to skeeve somebody out, tasting like stale water and the worst cunnilingus ever. Being a good sport and wanting to have an informed opinion for all of you, I decided that I needed to try a second one before I could call it. The next one tasted just as bad, was never swallowed and quickly gagged back out of my mouth. The Chinese nearby were thoroughly amused by the sight of a foreigner spitting up onto the sidewalk, and I did it shamelessly… Silk worm pupae are foul.

You can buy your own lamb leg for 40RMB. Obviously this was a must, though they’re deceivingly thin and have a lot more bone and tendon than it appears. The meat was great though and it still ended up being a large meal, as well as a greasy, messy one. I felt like Haggar the Horrible walking around that day. 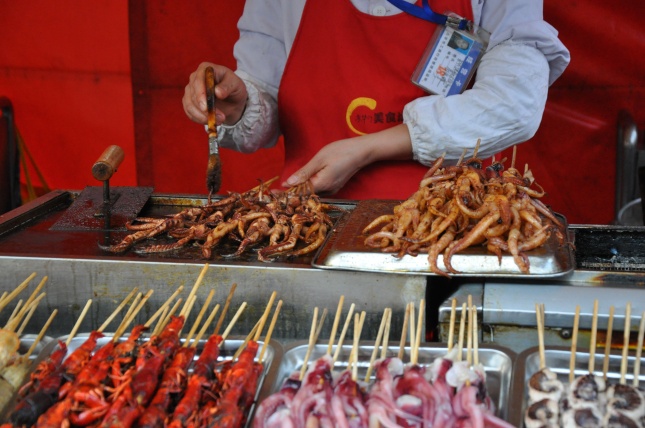 The squid tentacles were only okay, the spicy soy sauce they were drenched in helped a lot with their rubbery, briny tastelessness. They were quite the jaw work out though, and really weren’t appetizing at all. Maybe if they had been deep fried they would’ve tasted better, but that option wasn’t available here. So many Chinese people fiend for squid too, but they just weren’t for me. 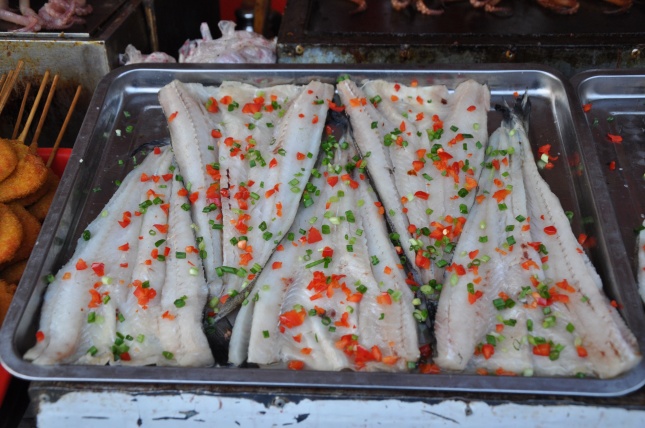 The shark fillets were totally worth it, well spiced and deep fried, they tasted a lot like codfish with an after taste of chicken. I didn’t expect them to be so tender either. I could’ve filled up on them, they reminded me of an American fish fry mixed with KFC.

If eating strange animals isn’t up your alley, the night market had a large vegetarian section for the Buddhists. Every and any type of tofu could be found here; some were candied, some were boiled, some were braised, and the majority of them were eventually fried. I was too busy moving through the animal kingdom though to spend anytime here; too many potential pets to eat and creepy crawlies to fry. 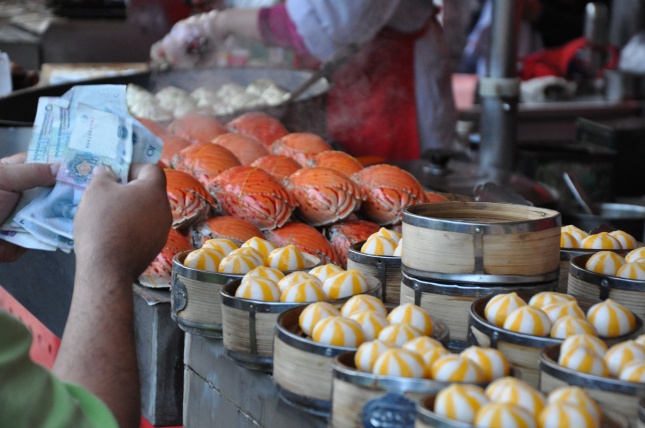 Overall, no exotic food was over 40RMB, with the lamb leg being the most expensive. Most were about 20RMB a stick, and all of it was very affordable. I’d filled up on animals that people keep for pets, and had eaten creatures that make women and girly men scream… It was an interesting and fulfilling day. And for anybody reading this who’s annoyed that I’d eaten fido or whisker’s distant Asian cousin, take solace in the karmic diarrhea I’d had the next day. I’m not sure if it’d been from the snakes or the silk worm pupae, but there were definitely some consequences for my gluttony.

These were some of the foods that I never got a chance to try, so look forward to part two one day:

Kidneys, though from what I’m not sure