This may come as a shock to my readers, but living in China is very different from life in America. Different social norms, different customs, different ways of going about getting what you want. After living there for almost a year, it’s only natural that I’d adjusted the way I act for their culture, and in some cases took on habits that would be considered rude, dirty, or even illegal back home.

Spitting– You can’t make it down a city block in China without flinching from the guttural sounds of somebody hocking up phlegm, instinctually moving aside as they spit globs of it out onto the pavement. You’re the only one who even reacts too, because in China all of this is completely normal. I’d recently come down with a nasty summer cold, and was constantly having to deal with a build up of mucus and gunk in my throat. What did I do, you might wonder? I’d decided to get Eastern, turning my throat into a gurgling trumpet and spitting that shit out wherever convenient. But I was no longer on the streets of Beijing being watched by the old, liver-spotted Chinese men who wouldn’t have looked twice; and so, in Albany, NY, I’m pretty sure I’d just ended up looking like a scumbag… But a scumbag with clear sinuses.

Jaywalking– Frogger must’ve been modeled after the streets of Beijing, inspired by Beijing’s utter lack of traffic safety and ‘cross at your own risk’ mentality. There aren’t many laws to protect pedestrians, and the fastest, heaviest, deadliest vehicle has the right of way in traffic. The Chinese are often forced to cross in large groups in order to get the cars to yield for them, because every driver knows that hitting a crowd of ten is going do way more damage than clipping one. Having just returned from this free-for-all to the city I grew up city in, it’s not surprising that I’ve forgotten the etiquette of western roads and cross whenever there’s an opening. No car still means no impediment, but no cross walk now means a jaywalking ticket. Several times in the past couple months I’ve fought my way into the middle of a busy street, waiting at the yellow line for a chance to make my way across the second half of the road. I’m as reckless while doing it as any homeless person, drunken college student or crackhead; the only Americans I’ve ever seen with the same level of disregard for moving vehicles as my post-China self. Drivers rubbernecked, people honked, and cops mean-mugged. Twice now I’ve been warned, and though I feel I might be pressing my luck, crosswalks just take too damn long.

A lack of deodorant usage– Not wearing deodorant and having a general musty stank to your person is pretty common in China. They just don’t see the need that we do, and often the guy who smells like fresh cologne is the one who gets a funny look. Rushing out the door smelling like a gym locker room is totally acceptable there, and sadly this grew to be a convenience for me. This general forgetfulness concerning Old Spice has followed me home, and often I only realize it once I’ve left the house and notice something a tad bit funky. This has come in handy at the gym though, nobody crowds me while I lift thanks to the unbridled foulness that strenuous exercise sans deodorant can create.

Invading the personal space of others– The Chinese don’t have that bubble of comfort we do surrounding themselves, and unwarranted personal contact, reaching across others and pushing by somebody isn’t offensive over here. When somebody throws their body weight through the crowded subway, nobody ever postures or gets defensive, they just continue hurling themselves in the direction they’d been heading in. It’s impossible to get too close in China, and that Western bubble of personal space pops quickly after you’ve had to push and squeeze your way into a subway car several times, riding with four different strangers pressed up against you at once. Being back home now, this acquired behavior has put me on a path to getting punched in the face. Rarely have I not offended an American by brushing past them to get through the door way they’d been blocking, or reaching by their face and across their things to grab whatever items I’d wanted to buy. The shocked looks they’d give me always displayed two things, violation and confusion; they were determining whether or not I was attacking them, and whether or not they should hit me for it. And if I’d had some drinks, I’d lose pretty much all regard for anyone in my path, ricocheting through people like I was in a pinball game… or perhaps the subway during a line transfer. After some tense conversations with people I’ve come in contact with, this is a bad habit I should probably drop before somebody comes into contact with me, and my nose. 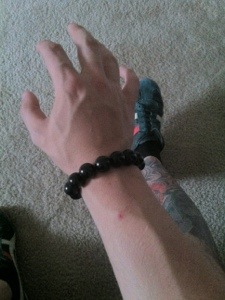 Wearing beads– Americans wear the cross, the Chinese wear beads. Chinese ‘prayer’ beads come in the form of bracelets or necklaces, and hold deep significance within both monk culture and Buddhism. Worn by the Chinese more often than wrist watches or any other jewelry, the prayer beads bring good luck and fortune to anybody wearing them, and for a foreigner, the local price and a welcoming attitude as well. Within an hour of leaving my house in NY with prayer beads on, feeling fresh and confident, the beads were off my wrist and in my pocket, and later inside the glove compartment of my car… where they’ll probably stay for the remainder of my time at home. I’m not a cultured laowai when I wear them here, but instead an effeminate guy wearing a whack bracelet who possibly likes other men. Who knows though, maybe they could be masculine and just aren’t in style yet. I’ll have to keep my eyes peeled for them next time I’m dragged into H&M; the most likely place in America where beaded bracelets will become popular first.