It’s only 170RMB they said. It’s the most convenient way to get to Yangshuo they said. By the time you wake up you’ll be there they said. At least, that was the idea.

Rich or poor, there’s a method for everybody when it comes to traveling in China. The speed trains were booked out for weeks, and flying was either going to be too expensive or too time restrictive for a spontaneous weekend getaway, so at the time, taking a night bus had sounded like the best option for getting out of the city one Friday afternoon. Dirt cheap and set to arrive productively early at 8am, I’d boarded the 36 bed tour bus around 9pm, looking forward to falling asleep to movies and waking up well rested for a weekend of hiking and exploring in the mountains of Yangshuo.

As soon as I’d crawled up into my bunk, I realized this wasn’t gonna be the relaxing ride I’d been hoping for. Whether it was due to the fact that I was literally several inches too tall for the length of the bed, or the many, many times I’d banged a knob or a funny bone against metal and corners while shifting or repositioning myself, or how every time the bus hit a bump, my body bounced upwards, smashing my shins against the lip of the foot cubby… within the first ten minutes it had become dismally clear that I wouldn’t be getting much sleep. 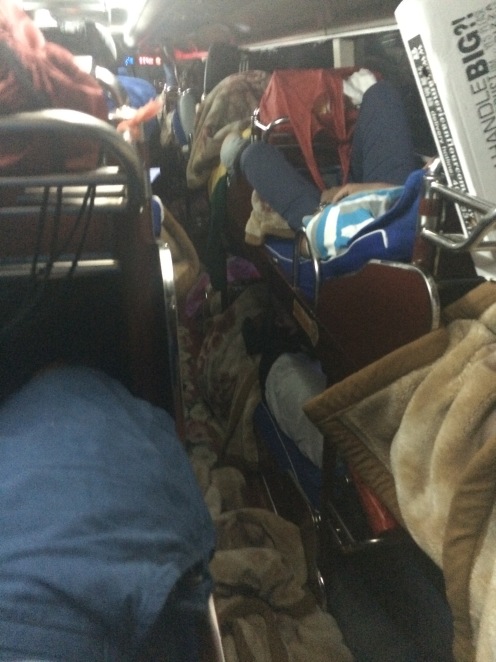 But still, I’d tried to think positively and make the best of it by padding my shins with clothing from my pack, and using the blankets provided to cushion the wooden foot cubby of the passenger behind me, which my head had overextended onto. And then the man underneath me’s phone went off, ringer set all the way up to “inconsiderately loud,” to which he answered befittingly, shouting into his phone to overcome the increasingly poor cell service. The whole bus had already sounded like a hot June night near a pond, with text alerts going off like Spring Peeper Frogs, but those could be blocked out by headphones easily enough. This guy and his ten decibel conversation though, definitely wasn’t.

They say the first scratch on a new car always hurts the most, but that isn’t the case when it comes to sleep deprivation. Besides the ten or so phone calls I hadn’t been able to sleep through, each of which consisted more or less of the person shouting about they hadn’t arrived yet, and ironically enough mentioning just as loudly how they were on a sleeper bus, the bus had also stopped about every 2 hours to pick up and drop off passengers, none of whom passed by me quietly or thoughtfully. Bags occasionally slapped against my bunk and whichever part of me that was slightly sticking out to make room for the rest of me, raucous announcements of arrival were made into phones, and most of the men exiting were in such a hurry to smoke that they’d already lit up as they passed by me. By the time I’d gotten off the bus and driven to my hotel, the only thing I wanted to do was sleep.

Budget travel comes at a price

Whoever said ‘It’s the journey that matters, not the destination,’ clearly never took a night bus to Yangshuo. But damn, this place was worth it