Sky scrapers, luxury cars, and expensive suits are the symbols of success, and naturally you’d expect to see plenty of each while walking through an area of the Central Business District. International businesses and the satellite offices of household names from back home fill the multiple fifty story buildings that tower here, as expensive cars and taxis navigate around pedestrians too distracted by their bluetooth conversations to use the crosswalks of the crowded streets below. It’s hard to imagine a man selling snapping turtles having any place at all here, but the small group of men in suits who had crowded around him and his reptilian merchandise one afternoon in front of a prominent bank had proven otherwise.

The business men were shouting over each other as they used the money in their hands to gesture and point, employing the same tactics they would use once they returned to their offices to trade stocks and engineer corporate take-overs. Un-phased by the yelling and pleased with their enthusiasm, the turtle man just sat there on the curb calmly, letting the men haggle as he showed off his different turtles. 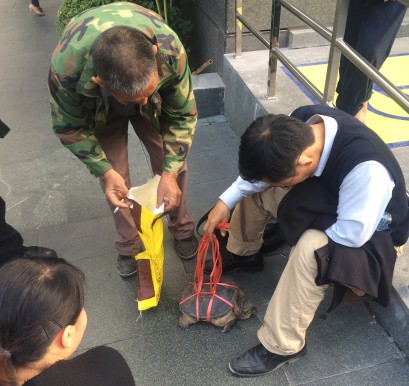 The caviar of the nouveau riche

While this was definitely the nicest area that I’ve witnessed a turtle sale on the street in, it definitely wasn’t the first. In fact, since early March I’ve been seeing turtle men about once a week in various middle-to-upper-class areas of Shenzhen, strolling around with several snappers at a time sticking out like a sore thumb (often more so due to their fashion than their business). Some have carried their turtles in burlap bags, others have sat with them leashed up in way that reminded me of pitbulls outside of a Brooklyn bodega, while some have even walked through heavy traffic making offers into the rolled down windows of BMW SUVs before the traffic lights had turned green. Day or night, I’ve seen them in every area of the city, selling the oddest commodity I’ve yet to witness here. 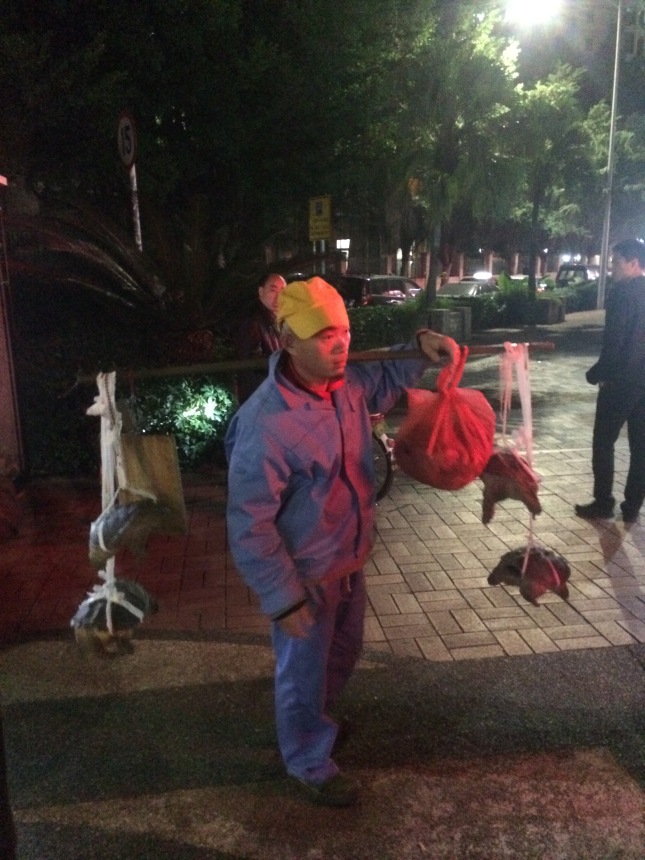 Not sure which is more shocking, that outfit or his turtle stick

Perplexed, I’d decided to ask around. My coworkers shrugged and said turtles taste good and are healthy, while one onlooker in an upper class neighborhood had mockingly pretended to pray while saying bàifó 拜佛, which means to worship Buddha. I’m still not really sure if he was trying to make fun of me for needing to ask, or the people who’d stopped to inquire about these fine terrapins. As usual, it was my Chinese teacher who’d offered the most helpful explanation. She explained to me the correlation between eating turtles and increasing your longevity, due to how long they can live for. And to my total lack of surprise, she added that there’s a belief that turtles can increase virility and help with making male children. But these turtles won’t work, look at them, they’re obviously captive bred. They’re too well fed and their shells aren’t beat up. You need wild caught turtle to actually get the effect. This guy is a scam artist. And here I’d thought selling a snapping turtle for almost 1000RMB on the street had been the only rip-off happening on that street corner. Silly me.

About as friendly as his merchandise. And as slow with the stick too.

The idea of transference through eating animals isn’t exactly a new theme in Traditional Chinese Medicine. There’s a reason chicken cartilage and organs are popular items on just about any restaurant’s menu; falling under the same line of thought as living longer by eating matured turtles, eating an animal part to enhance your own is a common belief over here. This even extends into male enhancement, because who wouldn’t believe that eating tiger weiners, ingesting a powder made from big’ole rhino horns, and drinking snake wine could have positive effects on your lower member. Maybe Yao Ming had been on a steady diet of giraffe steaks when he was a teen. I guess at face value this could all make sense, if it weren’t for that pesky thing called nutritional science. My dubiousness aside, if it works for you man… The placebo effect’s a hell of a drug.

A turtle a week keeps the reaper away

One thought on “The Turtle Men”